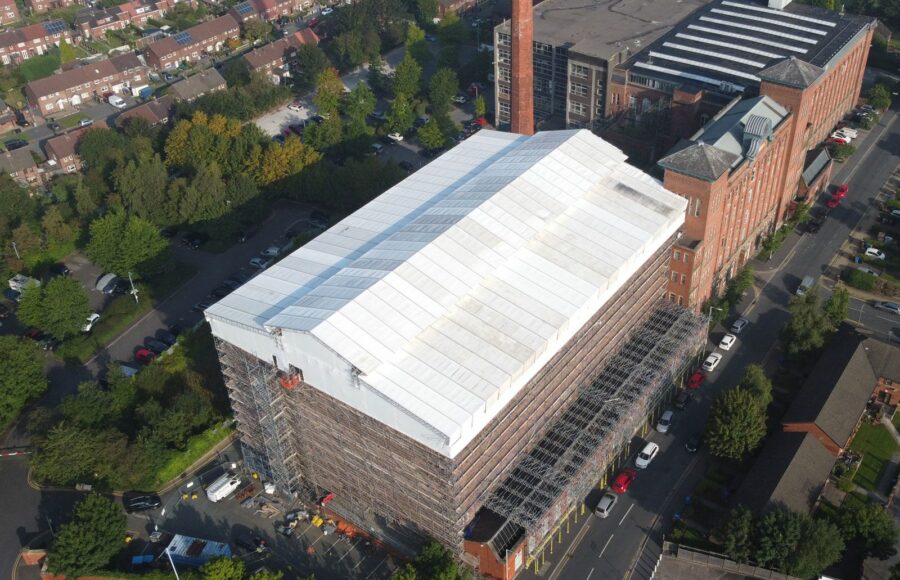 Buckley Design Solutions have been using their scaffold design expertise on a complex temporary roof structure at a Grade II mill building.

Originally constructed in 1865, Houldsworth Mill is a Grade II listed former cotton mill constructed for Henry Houldworth, a prominent mill owner of the time. The mill was a primary source of employment for people living in Stockport and is now considered an iconic landmark in the area.

Today, the mill is home to a mixture of residential and commercial units, however, due to issues being caused by water ingress to the penthouse apartments, it was deemed necessary to replace/make good the existing roof membrane. Initially Abbi Access Services only tendered to work on the roof of the South Mill, however, due to increasing water ingress causing further issues to the fifth floor apartments, the client decided upon a temporary roof system for full encapsulation of the mill. By installing a temporary roofing system before replacing the roofing membrane, the works to the roof could be undertaken without exposure to the elements and the increasing inclement weather.

Clearly, the access works to undertake the temporary roof installation and subsequent roof membrane replacement posed its own set of challenges. The mill needed to remain in use and so the design of the access works was a crucial factor in the project which would require considerable planning to ensure minimal disruption to the residents and business owners.

It was decided that the project would be undertaken in four phases:

Buckley Design Solutions, a Scaffolding Association Associate Member, faced a number of complexities when it came to designing the scaffold and access for the project. One of the key challenges they faced were the multi-level roofs which had specific and unique requirements of their own. A number of the low level roofs required approximately 50% of the perimeter scaffold to be supported by various primary support beam configurations. These primary support beams were supported by ground-founded independent/support towers at one end, with the opposing ends supported on shear ties, thus transferring the large, imposed loads from the scaffold, back into the building’s main structure.

One option that was considered during the design process, was to span the entire mill with a single duo pitch temporary roof, however, due to the high-risk nature of craning such a structure into place, the cost implications, and the global material supply chain issues due to the pandemic, this option was disregarded.

The design team at Buckley Design Solutions worked in collaboration with the client’s structural engineer to develop solutions using his insight into the mill’s structure which was invaluable throughout the design process.

“Whilst it was reasonably simple to determine that the basic temporary roof structure would work across individual spans, complexities arose when linking all spans, and in configuring the connections around the mill’s existing steel members.

The connections needed to adequately deal with movement, but also ensure that the mill’s existing steel members could accommodate the loads and forces imposed by the temporary roof. This was made rather more complicated by the fact that the steel fire escape walkway had to remain clear for use at all times.

To further reduce risk during the erection/dismantling of the temporary roof, it was decided that the central duo pitch section, spanning the glazed full height atrium, would be constructed using the aid of a rolling roof.”

It goes without saying that the complexities surrounding the access design on this iconic landmark made for the truly unique and exciting project for all involved.